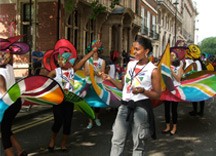 The Mayor of London invited Kinetika, the leading UK carnival arts company, to participate in the Beijing International Youth Festival in China, which ran from 11th to 16th July 2007. Thirty-five London based costumed participants, aged between 14-24, performed Imagination: Our Nation. The performance was inspired by Nobel prize winning Derek Walcott, and explored contemporary cultural identity over the next seven years, with the capital, London, as the focal point. Performances took place on the Great Wall of China and Tiananmen Square.

The only nation I have now is my imagination. – Derek Walcott (Nobel prize winner) 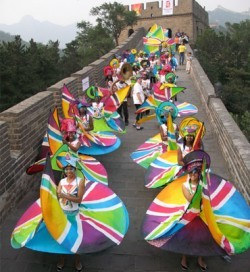 The trip, supported by the Mayor’s Office, saw youth representatives from across the globe, come together with the to share and connect with each others’ cultural journeys. The many diverse cultures that co-exist in London and it’s identity as a population of global citizenship finds a direct parallel with the Olympic sprit. The International Youth Olympics enabled young people from the UK to learn about Beijing and Chinese culture whilst providing the opportunity to share their own culture practices. The Beijing International Youth Festival was organised by the Beijing Olympic Games Organising Committee, the Beijing Tourism Office and the District Municipal Government.

Ali Pretty, Artistic Director of Kinetika: “Imagination: Our Nation is a project that is driven by the belief that in London we can celebrate our unique position of living in a city which houses the world. Never before has there been a time where we have such an opportunity to participate, through the arts, in a dialogue between cultures, which will become even more relevant as we lead up to the 2012 Olympics.” 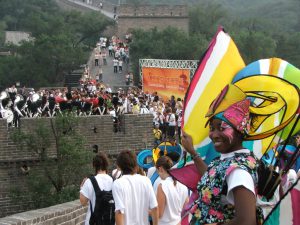 Ken Livingstone, former Mayor of London: “The Beijing International Youth Festival is a fantastic opportunity for young people from many nations to participate in cultural exchange, shared learning and activities. Kinetika have brought lively and colourful creativity to the streets of London and I am pleased they are taking part in this international event.”